THE climate news of August, and probably the year, is the passage of the Inflation Reduction Act (IRA). We hope you saw our Special Report about it.

In a nutshell, the IRA will make clean energy cheaper and easier to use than fossil fuels and will accelerate the burgeoning energy transition across economic sectors. The new law will get the U.S. very close to meeting its pledge to reduce greenhouse gas emissions by 50% by 2030 and could enable the world to reach its much preferred goal of capping the rise of global temperatures to 1.5℃ since the advent of the Industrial Age. Achieving these goals will keep us and future generations much safer, mitigating some of the disruption to our natural systems that could overwhelm us at higher emissions levels.

While some lambaste the bill for pushing us off fossil fuels too quickly and others because it pushes too slowly, for most climate-concerned people, the simple fact that climate legislation finally passed at the federal level makes the bill something big to celebrate. Certainly red states and districts should be celebrating as they dominate in clean energy technology and projects and stand to benefit the most from the IRA’s tax credits and investment. And yet in another example of politics trumping economic self-interest, every House and Senate Republican voted against the bill.

We hope that this monumental policy shift is in time. The ‘weather whiplash’ happening across the world is frightening. Heatwaves followed by unseasonably cool temperatures, drought conditions mixed with storms and flash flooding, all are happening so frequently that it is hard to keep track. Even the “monster monsoon” season in Pakistan that could leave one-third of the country underwater is likely linked to climate change.

These threats directly impact personal safety, food and water security, geopolitical stability, and economic well-being. In fact, ‘economics’ is our word of the month. From the United States to Australia – across China and Europe – last month we saw economic realities both pushing and pulling impactful climate initiatives and investments across a range of sectors.

Clean technology investments are good for the climate, good for most business sectors, good for most state and local economies, and good for most voters. We sincerely hope you help us pass along this message and will let us know what you think.

The IRA’s tax breaks and other incentives will greatly improve the ability to manufacture clean energy in the United States, leading one investor to say:

“I bet you there’s somewhere between 300 to 1,000 companies that will exist now because of this bill that would not have existed … the venture capital dollars will flow in a lot faster from areas that may not have been investing … we’re going to have a real path to scale with the best and the brightest people, and the best companies being created. That’s what this bill overall does.”

The Inflation Reduction Act gives the U.S. and the world a plausible chance to cap global warming at tolerable levels. That’s priceless … but it’s not all. New jobs, lower energy costs, savings on expenditures, and more all add up to a big win.

For example, one economic study finds the IRA will help push the retail costs of electricity down by 5-7% over the next decade. That will save consumers up to $279 billion or $220 per year, per household, and will insulate electricity prices against the volatility of international gas and oil markets.

Price drops will be felt quickly because so many clean energy projects are already in the pipeline – and renewables already deliver energy more cheaply than fossil fuels. That economic reality explains why wind and solar accounted for 67% of the new electricity capacity in the first half of 2022. All these projects, launched with pragmatic economic calculations, came online before the IRA passed. Simply put, the new law will supply the (carbon-free) rocket fuel to existing market forces.

Another report predicts nearly $2 trillion in projected climate-related spending could be avoided over the next 28 years by the IRA. The projected savings dwarf the law’s $375 billion in climate spending and highlights the broader calculus of climate: inaction is far more expensive than action.

Last month there were two market-moving stories of note coming from California. The state launched a plan to ban the sale of new gas-powered vehicles by 2035. Although California makes up only 10% of U.S. car sales, it is the country’s largest auto market and the dramatic move is expected to drive innovation and accelerate a national transition to electric vehicles. In fact, 17 states are poised to follow California’s lead. This is critically important because transportation accounts for the largest portion of greenhouse gas emissions in America.

The San Diego City Council passed legislation that bans natural gas in new home and business construction, joining a growing list of cities deploying similar prohibitions of this potent greenhouse gas. The measure also aims to electrify all the city’s existing buildings over the next 12 years.

The household gas ban is controversial. Several mostly red states have adopted laws designed to prevent their own cities from following suit, toeing the partisan dividing line on climate measures. Happily, though, there seems to be at least one carbon-free initiative that spans the aisle: the development of fusion energy. We’ve told you about government and private sector advances in this ‘holy grail’ technology before. It’s clean. It’s limitless. And it’s safe. What’s not to like? Both parties are supportive, it turns out, willing to invest in the vision that America can one day be a green superpower.

We will have competition, of course. It’s sobering to remember that the U.S. is still trailing China and the EU when it comes to investing in the world’s clean energy transition – despite the record-breaking funding provided by the IRA. And even Australia – once considered a die-hard ‘mega-polluter’ – is now enthusiastically jumping in with the market heft to make big waves.

All this is great news. It’s good for the climate, without doubt. It’s also sending valuable market signals to U.S. decision makers that they can only ignore at the nation’s economic peril. 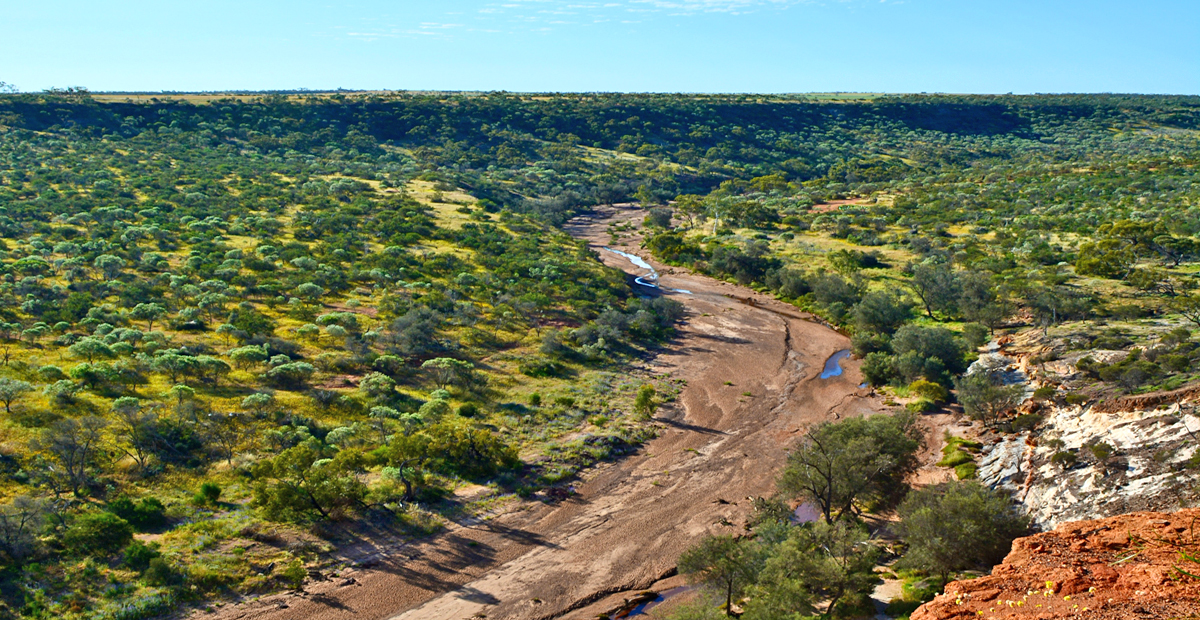 The United States’ political polarization around climate initiatives not only continues but, in some quarters, has gone into offensive mode. In our view, this is yet more political posturing at the expense of sound economics and constituent care.

For example, Members of Congress opposed to the IRA reversed the usual Washington dynamic and lobbied oil companies to denounce it. Regardless, Shell and BP came out for the bill immediately, and Exxon CEO Darren Woods called the bill “a step in the right direction” while on an investor call. Criticism from other leading oil companies was muted because they liked a lot about the bill – the carbon capture, direct air capture, and the methane portions had both carrots and a stick.

Outside the Beltway, some state treasurers are coordinating efforts to use public funds to punish companies pursuing climate action. Several of the nation’s major banks, for example, have been barred from government contracts in West Virginia because they’re no longer financing new coal projects which, the banks have argued, could be economic liabilities.

Meanwhile, it became clear that simultaneous droughts in the U.S., Europe, and China, among other places, have been dragging down the world’s largest economies and thus the global economy, as a whole.  Spain’s olive oil production is expected to drop by a third. Shipping on the Rhine has been curtailed, dealing a blow to German trade. Water levels in the Yangtze – the world’s third largest river – have dropped by half, compromising hydropower, drinking water, and shipping, and prompting a desperate Chinese effort to seed the clouds for rain.

In the U.S., drought is leading farmers to kill crops and sell cows. The iconic Colorado River – in its 23rd year of drought – can no longer water vegetables that feed the world or power hydroelectric plants, and gas and coal-fueled power plants along its tributaries are at risk of forced shut-downs.

The plight of coal is worth a closer look. Some 30 coal plants in the American West consume 156 million gallons of water a day – even while the region is in the grip of the worst drought in 1,200 years and made 40% worse due to climate change. The irony of the dilemma is two-fold: first, coal is the dirtiest energy source, emitting enormous amounts of carbon dioxide that causes global warming and the very drought conditions now compromising the plants’ operation; and second, coal and gas are often touted as more reliable energy sources than wind and solar because they’re not vulnerable to the vagaries of weather. That may be true. But it turns out they are vulnerable to water shortages, one of the certainties of climate change.

Now brace yourself for a case of ‘weather whiplash.’ Even as the American West endures the driest period in centuries, the region also saw multiple cases of record rains and flooding this year. In fact, drought-stricken areas experienced five rain events this summer that were so torrential they would normally be expected on a thousand year cycle. They were spread around the country but, nonetheless, the fact that five ‘thousand-year rain events’ struck within five weeks is extraordinary.

And then we have flooding caused by sea-level rise. We’ve set records for coastal flooding this year, too, and it’s only getting worse, according to the National Oceanic and Atmospheric Administration. The agency’s latest report says the sea level along U.S. shores is expected to rise nearly 2 inches on average over the next 30 years. That’s the same amount it rose over the last 100 years and faster than previous projections. As a result, coastal floods will be more frequent, more intense, and more widespread.

It’s a sad statement that such dire events and predictions have relegated mass extinction to a mere footnote in the news. We almost missed the report that climate change is the overarching factor contributing to the expected extinction of one in six U.S. tree species.

We hate to end on more news of concern, but this new interactive tool from Climate Central makes it easy to see what a warming planet means for your community. You can use the tool to find out how climate change could make summers in your city feel entirely different in the next 40-80 years. For example, by 2100, Chicago summers may feel more like today’s in Montgomery, Alabama. 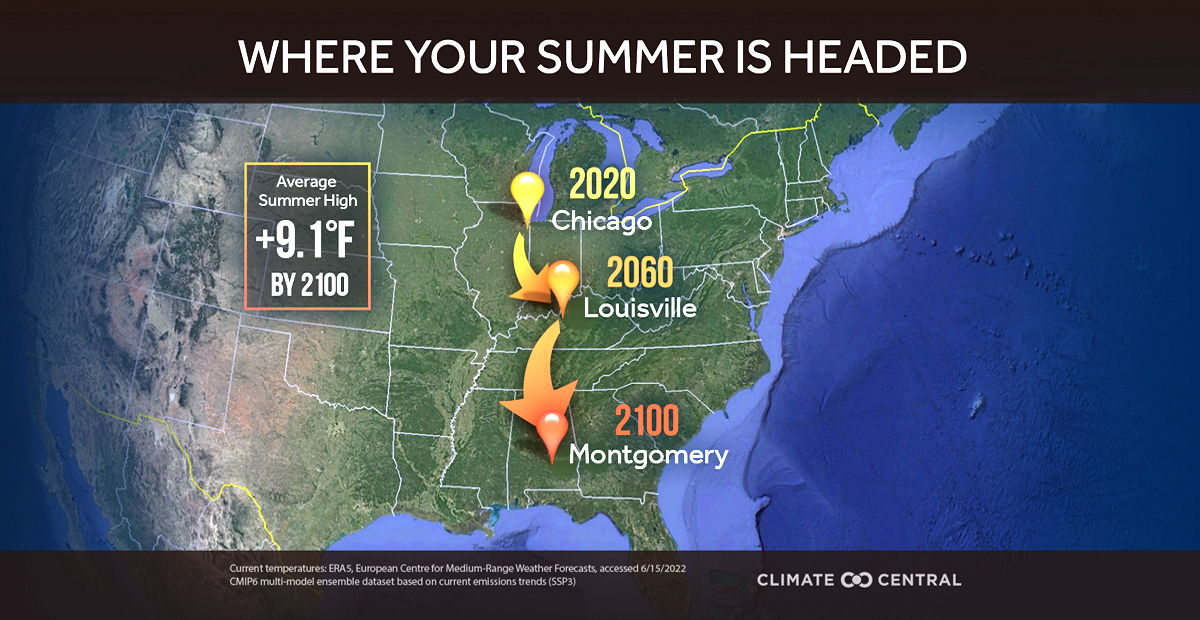 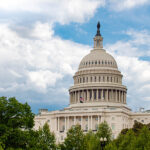