Every September for 14 years running, the United Nations and the City of New York have hosted Climate Week – a six-day event featuring some of the biggest names and most consequential developments in the world of climate. This year, in the wake of America’s landmark new climate law, the theme of the conference was ‘Getting it Done’ – which, to our ears, sounds like the “bang” of a starter pistol.

Indeed, the race to reduce greenhouse gas emissions has truly begun, and the conditions could be right for all the key elements to fall into place. Crucially, the vast majority of the international community agrees on global climate goals despite energy shortages due to supply disruption triggered by the Ukrainian conflict. Strong commitments have been made by the top polluters, including China and India. And Washington has finally passed legislation to put the extraordinary financial and political heft of the United States government behind meeting the climate challenge. The new bill, called the Inflation Reduction Act (IRA), is first and foremost a climate bill, and proponents hope it will unleash the motivation, creativity, and dynamism of hundreds of millions of individual workers, entrepreneurs, scientists, and businesses to create the new solutions to ‘get it done.’

Quite frankly, we’re excited. Whether they’re driven by a sense of mission, by the spirit of capitalism, or they’re simply caught up in the momentum, individuals are making a difference. We hope you are excited, too, by the many positive developments of the last month that we share below. Small actions are turning into big movements, and innovative ideas are turning into critical solutions that could help us win our race against climate change.

“Looking at all the numbers day by day across the world, I see a new global energy economy is emerging.” – Fatih Birol, Executive Director, International Energy Agency

Day by day, sector by sector, and nation by nation the world is changing how it prepares for and reacts to the climate crisis. Take a look at some of these important shifts:

For the first time, more people work in clean energy than in fossil fuel energy, according to the first comprehensive global inventory of energy jobs, World Energy Employment. This is true in the U.S. and even in coal-dominant countries like India and China. Importantly, the report also projects even bigger shifts toward clean energy. If the world continues its push toward a net-zero scenario, 14 million new clean energy jobs could be created by 2030, and an additional 16 million fossil fuel workers could switch over to clean energy jobs.

Economic shifts aren’t the only big transitions underway. Here in the U.S., one of the nation’s most influential evangelical groups has declared it sees climate action as a Christian responsibility. A report by the National Association of Evangelicals, which represents 45,000 evangelical churches, cites a ‘biblical basis’ for issuing a call to action for its membership. Since recent polling suggests that white evangelicals are more skeptical about the issue than other religious groups, a shift in this demographic is profound.

Nationally, another new study shows American climate skeptics are changing their minds about global warming for very pragmatic reasons: they are either personally experiencing the effects of climate change or they’re seeing and hearing more about its effects. The takeaway for the C-Change team is that your conversations matter. Keep connecting the dots. Thoughtful skeptics are listening and adjusting their views.

Turning to cool ideas that could really move the needle, in yet another example of simple, smart ways to get a two-fer, California is putting solar panels over aqueducts. The panels provide shade that stops water evaporation while generating electricity for the grid without taking up any new land.

Another solar application with enormous potential is also smart – but far from simple. A team of scientists in Australia has demonstrated that they can make clean, hydrogen fuel, which can be burned much like fossil fuels, with nothing but solar energy and air. Clean, green hydrogen usually requires huge amounts of water. The new technique uses humidity in the air, which means clean hydrogen could be created in many more places. These include some of the earth’s driest climates (where, paradoxically, there is a lot of moisture in the air) where the sun and wind provide the most energy.

Carbon-free fuels are the ultimate goal, but fossil fuels still provide around 80% of all energy globally. Until clean energy alternatives are developed and distributed enough to supplant coal, oil, and gas, fossil fuels will continue putting carbon into the atmosphere (2021 was the highest emissions year yet). That’s why there’s much excitement about a new project in Wyoming, accelerated by the IRA climate legislation, that is scaling up innovative technology to suck five million tons of carbon directly out of the air each year. It’s a milestone in the development of ‘Direct Air Capture’ technologies and a promising contribution to the carbon problem.

Here’s a final bit of hopeful news, about hydrofluorocarbons – a category of gases that are about a thousand times more heat-trapping than carbon dioxide. The U.S. Senate has finally ratified a treaty to drastically reduce usage of the chemicals, which are heavily used for air conditioning and refrigeration. The bill’s passage with support across party lines shows that when climate action aligns with job creation (which, as noted above, is beginning across the entire energy sector), we can get bipartisan support for action. Experts say that successfully phasing out HFCs could prevent up to 1℉ of warming by the end of the century. This is big.

But this month we want to take time to mourn the pending loss of some of life’s simple pleasures, too. Some of our favorite foods and beverages, for example, are already being drastically affected by climate change with grim projections for the next few decades. Suitable land for coffee growing is expected to decline 50% by 2050. Wineries across Europe and California are under pressure from drought and wildfires. The list of threatened edibles (and livelihoods) goes on and includes shellfish, corn, potatoes, rice, maple syrup, avocados, and much more.

And buckle up: you may not count air travel as one of life’s pleasures – even if it does take you to fun-filled vacations and family reunions – but it’s likely to get much less tolerable thanks to climate change. Severe turbulence – the kind that causes white knuckles and onboard injuries – may double or triple in the coming decades due to climate change. The airline industry and the National Transportation Safety Board are paying close attention, with more stringent seat belt rules on the horizon.

Moving up the scale from life pleasures to life-sustaining necessities, freshwater supplies are under growing strain from climate change right now, right here in the U.S. – and not just from heat-driven evaporation. Wildfires are more likely and more dangerous when conditions have become tinder dry due to higher temperatures influenced by climate change. When they are followed by hard rains (often enhanced by climate change as well) the carbonized debris can be washed into city water supplies where it mixes with chlorine to create a carcinogenic cocktail unfit for human consumption.

Elsewhere in the country, climate-induced flooding has literally washed away aging infrastructure, disrupting the delivery of potable water to hundreds of thousands of people for weeks at a time. This is on top of more incremental threats like drought-depleted reservoirs or rising sea levels that contaminate drinking supplies with saltwater.

And back to the big picture and more stark reminders of how much more we need to do: even with the latest round of emission reduction pledges, the world is on track to increase global temperatures 2.4℃ by 2100. You might remember that 1.5℃ is the maximum amount the planet can heat above pre-industrial times without catastrophic consequences, according to the Intergovernmental Panel on Climate Change.

This last piece of concerning news: in climate science, ‘tipping points’ are thresholds for change in various Earth systems. Once these thresholds are crossed, the system may collapse. A new study, however, says that even if we do manage to hold the line at 1.5℃ degrees, a handful of ‘tipping points’ are ‘likely’ to be triggered with a half-dozen more becoming ‘possible.’ 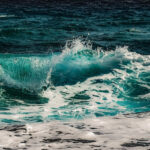